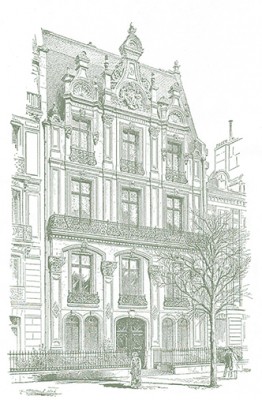 The gastronomic event in Paris this autumn: the Clarence opening in the heart of the capital of the Golden Triangle, with breathtaking views of the Grand Palace. Christophe Pelé and Antoine Pétrus are taking to the Champs-Elysées, the table’s commands winery Clarence Dillon, which includes Haut-Brion, Mission Haut-Brion, and Quintus Clarendelle.

Revealing inside a splendid courtyard and bright planted wall, the building dating from the nineteenth century acquired by Prince Robert of Luxembourg, President of Clarence Dillon

The Clarence, the Grand Bar and reception rooms – connected by a monumental marble staircase – were completely designed and built by him, with the complicity of the British architect and designer James Hunter

Antoine Petrus, 32, who was the Manager of Lasserre, watch over a selection of the legendary Clarence Dillon wines of the estate, as well as champagne and sauternes. A list that enrich early January 2016 of the finest French terroirs: Burgundy, Rhone Valley, Loire, Alsace, Languedoc … The cellar will house while 18,000 bottles for 600 references.