Home / Excursions outside of Paris / Alsace

A visit of Alsace region

Located at the frontier with Germany, this region is famous for its white wines such as Gewurtztraminer, Riesling or the sparkling wine Crément d’Alsace but also for its very special history that explains the mix between French and German culture.

A day trip will allow you one of the two below options. They can be combined in two days. 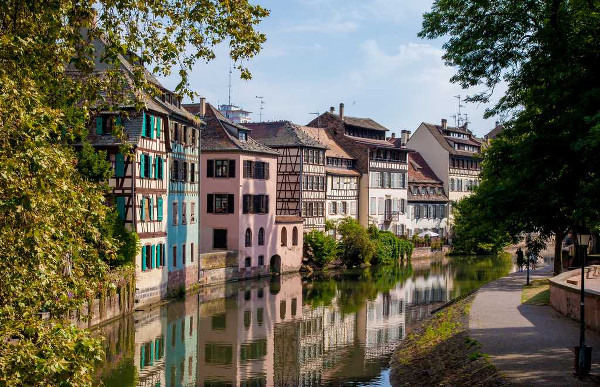 Surrounded by the river L’Ill, the center of Strasbourg is built as an island. The train station is located 15 minutes walking distance or 5-10 minutes taxi ride from the very center.
You will probably start walking around the Petite France, so beautiful with its traditional timbering houses, canals and covered bridges. After a walk on those charming cobbled streets, you will arrive in the medieval center and admire the Cathedral described as a “gigantic and delicate marvel” by Victor Hugo. After passing by the large avenues and impressive buildings reflecting the German history of the city, you will arrive in the more modern European district.

The Wine road goes from Thann (South) to the Marlenheim (North). With a total of 170 kms, this road crosses over 73 typical villages. This itinerary houses more than 300 wine houses and 50 “Grand Crus”. We would recommend you to focus on the part between Barr and Rouffach where you can admire the most charming villages such as Ribeauvillé, Riquewihr, Kaysersberg and eventually stop in Colmar, the second city in Alsace.

The best seasons to visit Alsace region are between April and October when the vines still have their leaves and in December for the magical Christmas markets and decorations of Strasbourg.

Transportation
Strasbourg is located two hours and half away from Paris by train which is definitely the most comfortable and fastest option. Please be aware that transportation service will be needed if you wish to explore the wine road.