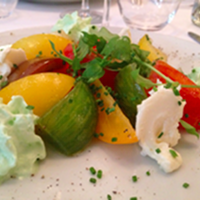 The definitions of a true and typical Parisian bistro have changed a lot throughout the years. While Paris’ visitors are seeking old world charm combined with rich and heavy bistro classics, the local’s expectations have moved on with the years. Certainly there are still a few legendary institutions like Quincy, Fontaine de Mars, Allard, Josephine Dummonet, Chez Denise – La Tour de Monthlery and Moulin a Vent, reminiscences to the ancient times. Classics such as steak frites, snails, cassoulet and foie gras made those establishments legendary and hopefully will never change.

The Parisians nowadays (mostly) look out for lighter and more upscale dishes, inspired by the trend of bistronomie initiated by such revolutionaries as Spring, Chateaubriand and Frenchie. Naturally we try to offer you a variety of both legendary and tradition at the same time as younger and more contemporary approaches.

L’Affable is one of the contemporary approaches boasting  a chic decor of milk-glass globe lamps and ruby red-colored banquettes on an old mosaic floor, daily changing chalkboard specials and a menu offering inventive French cuisine inspired by influences from all over the world. All of these make L’Affable one of the most interesting venues in the triangle between the musée d’Orsay, Place Saint-Germain-des-Prés and the Bon Marché. Its hidden location on quiet rue Saint Simon, just a few steps from metro rue du Bac, prevents it from being overrun by tourists, preserving its natural local charm and identity. A true left bank bistro – chic frequented by a true left bank crowd, coming for the convivial ambiance, charming service and truly delicious creations.

Head chef Jean-François Pantaleon formed at two Michelin Star Apicius and the Grande Cascade before finally heading his own team at L’Affable. While keeping the simple spirit of bistro cooking Jean-François Pantaleon plates beautiful dishes that are both inspired and purist at the same time. The outcome is a grilled ST. Pierre with sweet potato gnocchi and grilled peaches, Argentine Entrecote with Raifort cheese emulsion (what a take on to a bistro classic) or a salad of ancient tomatoes with basil Chantilly (cream), lemon-sea weed granite and creamy Burrata.